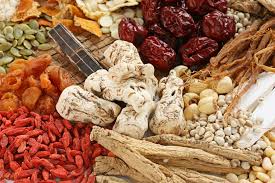 An in vitro study of neuroprotective properties of traditional Chinese herbal medicines thought to promote healthy ageing and longevity.

Age is the leading risk factor for acute and chronic neurodegenerative diseases. The Shen Nong Ben Cao Jing, the oldest known compendium of Chinese materia media, lists herbal medicines that were believed to exert neither fast acting pharmacological effects nor discernible toxicity, but to promote general health and longevity. In modern terms, these herbal medicines could be considered as complementary health care products for prevention rather than treatment of diseases. In the present study, we examined whether a selection of 13 such herbal medicines exhibited neuroprotective activity.

Most of the herbal extracts showed negligible toxic effects at 100 μg/ml. However, Polygonum multiflorum and Rhodiola rosea exhibited some neurotoxicity at this concentration. Extracts of Ganoderma lucidum, Glycyrrhiza glabra, Schizandra chinensis, and Polygonum cuspidatum inhibited staurosporine-induced apoptosis by 30 – 50% in a dose-dependent manner. The neuroprotective effects of Polygonum cuspidatum were predominantly due to its major ingredient, resveratrol. The effective herbal extracts showed various levels of reactive oxygen species (ROS) scavenging capacity, which was significantly correlated with their neuro- protective activity. However, P. multiflorum and R. rosea extracts proved to be the exception as they exhibited a high level of antioxidant capacity, but did not exhibit neuroprotective effects in cell-based assay.

This in vitro study provides evidence for neuroprotective activity of some Chinese herbal medicines traditionally used to promote healthy ageing and longevity. Our results provide a justification for further study of these herbal extracts in neurodegenerative animal models to assess their safety and effectiveness as a basis for subsequent clinical trials. These herbal medicines might potentially offer a novel preemptive neuroprotective approach in neurodegenerative diseases and might be developed for use in persons at risk.