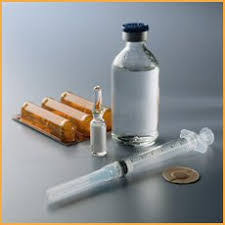 Neural therapy is a medical approach that diagnoses and treats local

disturbances of the autonomic nervous system. The foci of disturbance,

abnormal neurological signals to which the autonomic nervous system reacts.

How does Neural Therapy work at a site of disturbance?

A German neurophysiologist, Albert Fleckenstein, demonstrated that the cells in scar tissue have a different membrane potential from normal body cells, functioning much like a 1.5 volt battery implanted into the body. Whenever a cell has lost its normal membrane potential, ion pumps in the cell wall stop working. This means that abnormal minerals and toxic substances accumulate inside the cell. As a result, the cell loses the ability to heal itself and resume normal functioning. Procaine acts on the cell wall to allow the ion pumps to resume normal action and restore the membrane potential. This is how Procaine and other agents used in Neural Therapy correct the bioelectric disturbance at a specific site or nerve ganglion. By reestablishing the normal electrical condition of cells and nerves, the disturbed functions are also restored to normality, and the patient returns to health as far as this is anatomically still possible. The amazing part of Neural Therapy is that the site being treated can be very far away for the tissue in the body that is not functioning properly. For example, a scar on the chin can affect the low back. This is possible because of the vast network of nerves called the Autonomic Nervous System.

This was also recognized when two German doctors in the late 1940’s and 1950’s, made the discovery that if someone had an operation and there was scar tissue over say, the appendix area, this area would then cause a disturbance in the nerve flow through that area. This could lead to chronic hip pain, chronic knee pain, or a dysfunction in some area. Quite by accident, these doctors noticed that if a small amount of a local anesthetic was injected into the area of the scar, then the knee pain or hip pain would dissipate

Interference fields seldom draw attention to themselves and are often found in unlikely places, – surgical scars being the stereotypical example. Even stranger, is the fact that the autonomic nervous system may react to interference fields by creating symptoms in remote areas of the body. For example an appendix scar may be a source of long-standing migraine headaches.

The autonomic nervous system reacts to interference fields in many different ways. Myofascial or other pain syndromes may occur. Visceral function may be disturbed, resulting in illnesses such as asthma, GERD, angina, irritable bowel syndrome, menstrual irregularities, etc. In addition, virtually all orthopedic medical conditions have an autonomic nervous system component, at least in part.

Interference fields are not rare. In fact they can be found in a substantial portion of patients in any medical practice, and in particular the practice of orthopedic medicine. They should be looked for in any condition where the autonomic nervous system is involved, which includes most pain syndromes.

The main challenge in the practice of neural therapy is detection of these interference fields. The most easily recognized are those found in scars, but other locations such as teeth, autonomic ganglia, internal organs, and somatic dysfunction are also common. (Somatic dysfunction by definition includes an autonomic nervous system component and behaves in every way like all other interference fields .)

Interference fields may be found by two different methods. One is by careful history taking. A key element of the history is a latent period of a few weeks between the illness or injury (e.g. surgical procedure) and the onset of symptoms. The other method is by physical examination. Neural therapy was developed in Germany beginning in the 1920’s. Unfortunately for the English speaking world, most of its literature has been published in German only. One textbook, currently out of print, has been translated into English

How is Neural therapy administered?

Treatment is the easier part. The classic method is to infiltrate the interference field with dilute (preservative-free) procaine or lidocaine.  The rationale for this treatment is that interference fields are caused by local cell membrane instability. A caine anaesthetic (through its cell membrane-stabilizing properties), restores the electrical potential, and helps normalize the physiology of the tissues. This effect lasts longer than one would expect from local anaesthetics and with repeat treatments the interference field is often permanently abolished.

At Integral Medicine in Sarasota, Fl.  We also inject ozone along with the procaine into the inference fields for increased efficacy.

NEURAL THERAPY was last modified: May 29th, 2020 by asmithers